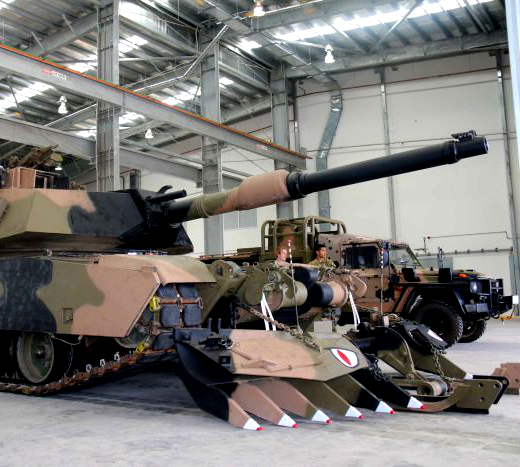 A new shed has opened in Darwin, and it is the kind that would make any heavy-machinery enthusiast weak at the knees and hot under the collar.

Many areas have been specially reinforced, so that the carriageways can enough to handle the weight US-built M1 Abrams tanks’ 62-tonne bulk.

And of course, it can withstand a cyclone.

Retired Major General Peter Haddad, for whom the centre is named, said the complex would support US Marines rotating through Darwin.

“My understanding is those who are in charge today see this as a potential site for doing some of that support for the Marines,” he told the ABC at the ribbon-cutting ceremony.

“So they will have similar problems in keeping their equipment going when they're here.

“This infrastructure here allows Joint Logistics Unit North to position itself to be part of that logistics solution. And that decision will be made by the US of course.”

Major General Haddad, who was in charge of Defence Force logistics in East Timor in 1999, said the complex had brought together logistics previously spread out across 38 locations in NT.

“Darwin was probably in the worst situation of our whole national network,” he said.

“The information system was stuck in the 1940s and the facilities here were very much the same.”

“The range of equipment that we can maintain can now be from the M1 Abrams tank, the M113 armoured personnel carrier... and the ASLAV protected mobility vehicles that were so successful in Afghanistan,” he said.

The Federal Government says the logistics facility is the Northern Territory's largest construction project this year.

Interestingly, during construction, a litter of dingo puppies were found without their mother. The pups were cared for by a local vet, and found to be 99 per cent pure breed - extremely rare in the Top End