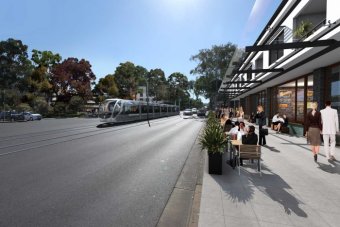 The Parramatta City Council has unveiled its big plan for a city-wide light rail service, mapping out a 31-stop route over thirty kilometres of track.

The Council approved a second feasibility study earlier this week as the plan steams ahead. The basic map sees tracks running north to connect Parramatta with Castle Hill via Westmead, Northmead and Baulkham Hills; a second line would also be laid travelling east to Macquarie Park via Dundas, Epping and Marsfield.

The new plan says the rail network would cost slightly less than originally thought, still coming with a price tag of $1.5 billion.

The report also acknowledges the myriad challenges that lay ahead of the project; managing traffic and business across the city during construction, buses, pedestrian safety, land availability, environmental impacts and not least - how to cross the Parramatta River.

One Parramatta Councillor said it was too early to discuss the details of land acquisitions for the project, saying only that there is already significant private sector interest in the light rail proposal.

The Council could have a fight on its hands soon, with residents already raising concerns over the future of the nearby Brush Farm Park and Brush Farm Park Bowling Club. Supporters of the park say proposed lines could threaten the park’s bird life, possums, blue tongue lizards and stands of rare gums.

Brush Farm Park Bowling Club President Pierina Dick said: “Leave our bowling club alone, I wouldn't say it's for the pleasure of the elderly, it's for the retired, the mature people here.”

Parramatta Lord Mayor John Chedid said: “I can assure you we won't be going through any bowling club, but in saying that we might have to make a small sacrifice for a greater outcome for the whole region.”