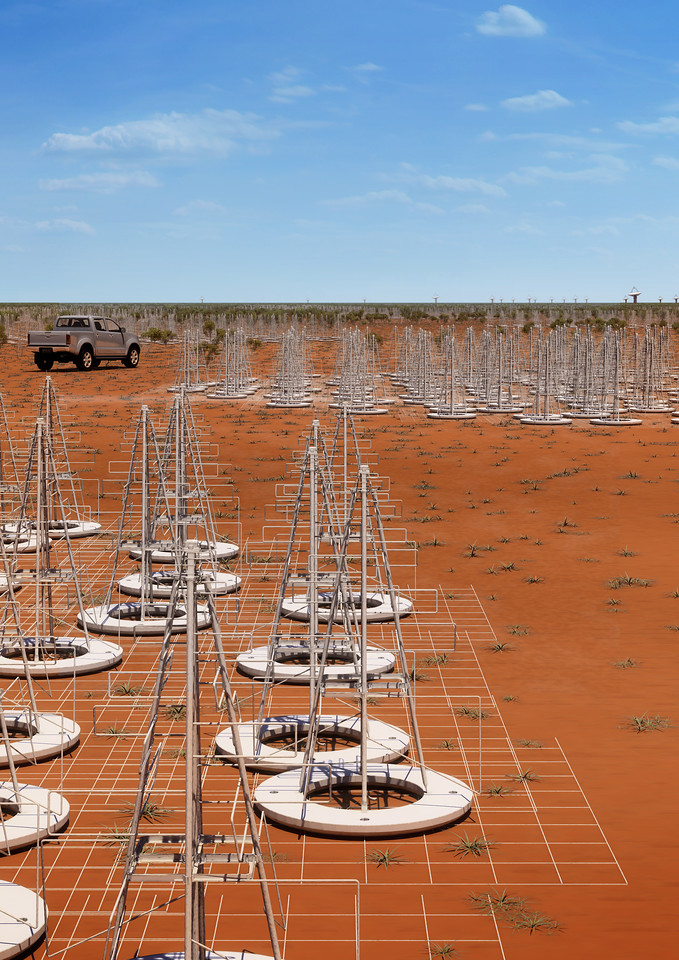 Traditional custodians have signed a deal for the $3 billion Square Kilometre Array.

Traditional custodians of the Murchison region in Western Australia have officially consented to the giant radio telescope being built on their ancestral lands.

The agreement enables expansion of CSIRO’s radio astronomy observatory site to allow for construction of the international SKA-Low telescope, part of the global SKA Observatory, alongside existing instruments including CSIRO’s ASKAP radio telescope.

The SKA-Low telescope, alongside its counterpart SKA-Mid in South Africa, will explore the Universe in incredible new detail. If built as planned, it should be able to survey the sky more than ten thousand times faster than before.

About 150 people gathered at the remote Murchison Settlement yesterday to celebrate the signing of an Indigenous Land Use Agreement (ILUA) with the Wajarri people and the Commonwealth government after nearly seven years of negotiation.

During the on-Country event to celebrate the ILUA, the Wajarri Yamaji announced the gift of a traditional name for the expanded observatory site.

The traditional name was suggested by Wajarri woman Shakira Whitehurst for a competition run by the Wajarri Yamaji Aboriginal Corporation (WYAC) and selected by members of the Wajarri Minangu Land Committee, the Traditional Owners of the observatory area on Wajarri Country.

The Wajarri name will be one part of a new dual, official name for the site: Inyarrimanha Ilgari Bundara, the CSIRO Murchison Radio-astronomy Observatory.

“We look at the sky every day, and we now have the opportunity to share our skies with the rest of the world. This Wajarri name connects our culture and language to what our Country is being used for,” says Jennylyn Hamlett, WYAC Chairperson and Minangu Land Committee member.

CSIRO Chief Executive Larry Marshall said he was humbled the Wajarri Yamaji had chosen a name connecting the rich heritage of the region’s first astronomers and their connection to Country with the modern scientific instruments on the site.

“Providing a means for the Wajarri Yamaji to share their culture and language with Australians and researchers around the world is a privilege,” Dr Marshall said.

“Protecting heritage and Country are critical elements of the ILUA, and CSIRO is proud to be partnering with the Wajarri Yamaji in the land management and cultural heritage protection of the observatory site, ensuring that we leave our footprints carefully in the sands of time as we walk side by side into a better future together.”