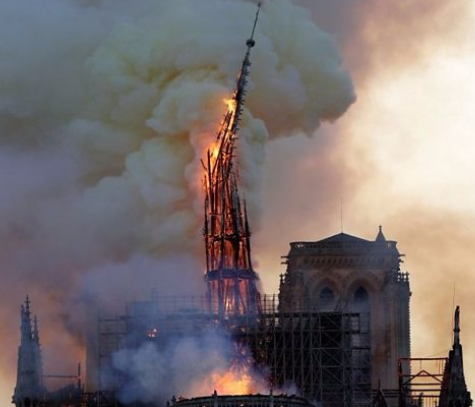 Soil testing has found that nearly a tonne of lead was dumped by the Notre Dame fire.

In April, 2019, the world watched as black and yellow smoke billowed from the Notre Dame cathedral in Paris.

The fire started just below the cathedral’s roof and spire, which were covered in 460 tons of lead — a neurotoxic metal, dangerous especially to children, and the source of the yellow smoke that rose from the fire for hours.

The cathedral is being restored, but questions have remained about how much lead the fire emitted into the surrounding neighbourhoods, and how much of a threat it posed to the health of people living nearby.

A new study has used soil samples collected from neighbourhoods around the cathedral to estimate local amounts of lead fallout from the fire.

Lead levels in the soil samples indicated that nearly a tonne of lead dust dropped down within one kilometre of the site, and areas downwind of the fire had double the lead levels compared to sites that were outside the path of the smoke plume.

The study concludes that, for a brief time, people residing within a kilometre and downwind of the fire were probably more exposed to lead fallout than measurements by French authorities indicated.

In samples collected within a kilometre the cathedral’s remains, the levels averaged 200 mg/kg. In the northwest direction downwind of the fire, the lead was significantly higher, averaging nearly 430 mg/kg — double that of the surrounding area, and surpassing France’s 300 mg/kg limit.

Early evidence suggested that the fire increased lead exposure in Paris. Air quality measurements taken 50 kilometres away from the cathedral found that lead particulates in the air were 20 times higher than usual in the week after the fire.

However, a small set of measurements by France’s Regional Health Agency, posted weeks after the fire, found that all the samples collected outside of the out-of-bounds area around the cathedral had lead levels below France’s limit of 300 milligrams per kilogram of soil.

At the time, there were fears that the health agency was underplaying the potential health impacts and not being transparent enough.