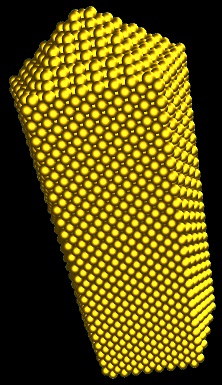 Engineers in the US have developed a healthy method to make nanoscale gold rods in large quantities, with complete control over the rods' dimensions and optical properties.

The interaction between gold nanorods and photons makes them extremely useful in biomedical applications, from imaging technologies to cancer treatment.

The study started with an existing technique in which gold nanorods are formed by mixing two chemical solutions together.

The old method only converted 30 percent of the gold into nanorods, with the rest remaining dissolved in solution.

To form the remaining 70 per cent of the gold solution into nanorods, researchers added a continuous stream of Vitamin C, while constantly stirring the mixture.

The solution was stabilised with cetyltrimethylammonium bromide, a common ingredient in hair conditioner.

It turns out the ascorbic acid pulls the gold out of the solution and deposits it on the existing nanorods.

Even more excitingly, they found the slower they added the ascorbic acid, the stubbier the nanorods became.

Recent biomedical applications for gold nanorods include sensors which can read and detect tiny sequences within samples of DNA, which can help diagnosing patients, solving crimes, and identifying the origins of biological contaminants, such as a pathogen in a water supply.

“This technique should facilitate the economical manufacture of large volumes of gold nanorods,” says Dr. Joseph Tracy, an associate professor of materials science and engineering at North Carolina State University and senior author of the paper published in the journal Chemistry of Materials.

“That should be good news for both the science community and the biomedical research and development community,” he said.