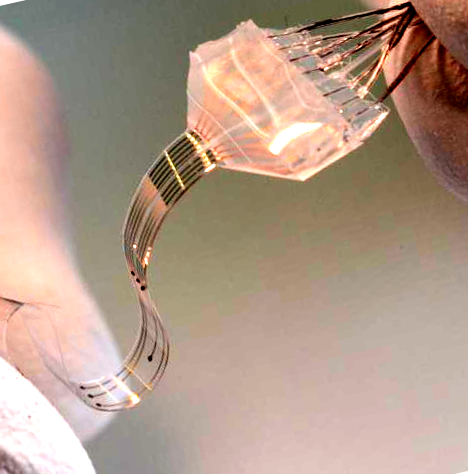 An elastic implant that moves with the spinal cord has restored the ability to walk in paralysed rats, and could be on the way to human trials.

Engineers at Ecole Polytechnique Federale de Lausanne (EPFL) have developed one of the longest-lasting implants for spinal cord injury.

It bridges damaged gaps in the spinal cord to ensure that signals are carried to their destinations.

The same group of researchers have previously used chemical and electrical stimulation of the spinal cord to allow injured rats to “sprint over ground, climb stairs and even pass obstacles”.

“The implant is soft but also fully elastic to accommodate the movement of the nervous system,” EDFL researcher Professor Stephanie Lacour told reporters.

“The brain pulsates with blood so it moves a lot, the spinal cord expands and retracts many times a day, think about bending over to tie your shoelaces.

“In terms of using the implant in people, it's not going to be tomorrow, we've developed dedicated materials which need approval, which will take time.

“But we really believe this will be a solid and robust technology for humans.”

The implant is built from elastic silicone and features wiring embedded with “microcracked” gold.

The gold treatment has tiny cuts in its surface, making the wiring flexible enough to move and change with the body..

Dr Dusko Ilic, from King's College London, said: “This is quite remarkable, until now, the most advanced prostheses in intimate contact with the spinal cord caused quite substantial damage to tissue in just one week due to their stiffness.

“The work described here is a groundbreaking achievement of technology, which could open a door to a new era in treatment of neuronal damage.

“However, there is still a long way to go before we may see any practical use of such neuroprostheses in humans.”

Dr Mark Bacon, the scientific director of the charity Spinal Research, told the BBC: “Translation of experimental treatments to humans often falters because insufficient attention is given to some of the more pragmatic aspects of translational science.

“The combination of electrical and chemical stimulation has been proven in principle - in animal models at least - so it is encouraging to see the application of multidisciplinary efforts to take this one step closer to safe testing in patients.”