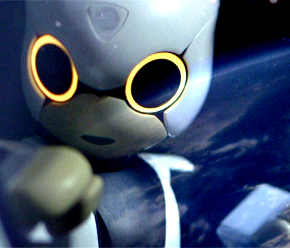 A Japanese astronaut has bid farewell to his small robot companion, after the two spent six months together orbiting the Earth.

Astronaut Koichi Wakata showed only a glimmer of sadness when saying goodbye to his little floating companion, Kirobo.

The two parted ways this week after six months aboard the International Space Station, where Kirobo helped keep Wakata alert and sane during his otherwise solo mission.

The broader mission of the Kirobo Robot Project was to look at the growing problems of a less communicative society, to make human-robot interactions more realistic and fulfilling.

If the farewell chat between the astronaut and the robot is anything to go by, those interactions are now downright lovely.

But Kirobo is no fickle human; he is a technological being with no time to waste on feelings or needless sentimentality.

Kirobo took the break-up in his unemotional stride.

“My only regret is that I’ll be leaving you alone here,” Wakata said.

But there is some sweetness to the parting sorrow, as the duo have pledged to re-unite when the little android makes it back to Earth at the end of the year.

Kirobo, the first talking humanoid in space, is programmed to create natural conversation by processing questions and selecting words from its vocabulary to construct an answer, instead of giving pre-programmed responses.

The touching farewell has been captured in a video below, as well as an explanatory film produced before the mission started.