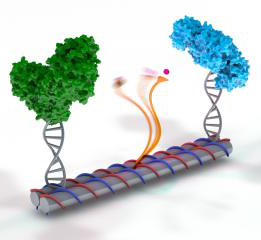 Bio-engineers have developed a way to use molecules of DNA like scaffolding to build entirely new structures.

The applications go far beyond the broad medical use, and could potentially impact energy systems and other technologies.

In very simple terms, it means complex compounds can be made by simply putting the ingredients together and making DNA build the material.

The team of DNA nanotechnology pioneers from the US have taken advantage of the binding properties of the chemical building blocks of DNA.

They can now twist and self-assemble DNA into increasingly imaginative 2- and 3-dimensional structures for medical, electronic and energy applications.

In their latest breakthrough, the research team took up the challenge of mimicking enzymes outside the friendly confines of the cell.

These enzymes speed up chemical reactions, used in our bodies for the digestion of food into sugars and energy during human metabolism, for example.

“We look to Nature for inspiration to build man-made molecular systems that mimic the sophisticated nanoscale machineries developed in living biological systems, and we rationally design molecular nanoscaffolds to achieve biomimicry at the molecular level,” said Professor Yan Liu said chair of the Arizona State University’s Department of Chemistry and Biochemistry.

With enzymes, all moving parts must be tightly controlled and coordinated; otherwise the reaction will not work.

The moving parts, such as substrates and cofactors, all fit into a complex enzyme pocket just like a ball into a socket.

Once all the chemical parts have found their place in the pocket, the energy that controls the reaction becomes more favourable and chemistry happens.

Each enzyme releases its product, like a baton in a relay race, to another enzyme to carry out the next step in a biochemical pathway in the human body.

“Dehydrogenase enzymes are particularly important since they supply most of the energy of a cell,” said researcher Nils Walter.

“Work with these enzymes could lead to future applications in green energy production such as fuel cells using biomaterials for fuel.”

To meet this challenge, the team first made a DNA scaffold that resembled several paper towel rolls glued together.

Using a computer program, they were able to customise the chemical building blocks of the DNA sequence so that the scaffold would self-assemble. Next, the two enzymes were attached to the ends of the DNA tubes.

In the middle of the DNA scaffold, they affixed a single strand of DNA, with the NAD+ tethered to the end like a ball and string. This swinging arm is long, flexible and dexterous enough to rock back and forth between the enzymes.

Once the system was made in a test tube by heating up and cooling the DNA, which leads to self-assembly, the enzyme parts were added in.

They confirmed the structure using a high-powered microscope, called an AFM, which can see down to the nanoscale, 1,000 times smaller than the width of a human hair.

The team built a full-scale model so they could test and measure the spatial geometry and structures, including in their setup a tiny fluorescent dye attached to the swinging arm.

When the reaction took place it was measured by a red beacon signal that the dye gave off.

With a single swinging arm in the test tube system working just like the cellular enzymes, they decided to add arms, testing the limits of the system with up to 4 added arms.

They were able to show that as each arm was added, the G6pDH could keep up to make even more product, while the MDH had maxed out after only two swinging arms.

“Lining enzymes up along a designed assembly line like Henry Ford did for auto parts is particularly satisfying for someone living near the motor city Detroit,” said Walter.

“An even loftier and more valuable goal is to engineer highly programmed cascading enzyme pathways on DNA nanostructure platforms with control of input and output sequences,” said Yan

“Achieving this goal would not only allow researchers to mimic the elegant enzyme cascades found in nature and attempt to understand their underlying mechanisms of action, but would facilitate the construction of artificial cascades that do not exist in nature.”