With the upcoming election just over a week away all parties are pulling their biggest promissory punches, Kevin Rudd’s latest pledge is for the much-speculated high-speed rail network on the country’s east coast.

The proposition has been made by politicians from all sides over the years, with the current PM’s idea the latest in the series. This iteration would see a link between major east coast centres of Brisbane, Sydney, Canberra and Melbourne, costing around $114 billion with a completion date of 2053.

The pledge from the PM said he would legislate to protect the 1,748-kilometre corridor for the project and to establish a new High Speed Rail Authority. The Authority would also be given $52 million to determine the route of the track, locations of stations and other negotiations.

Estimated figures in the announcement overnight said the rail would be used by 83.6 million passengers per year. They would travel in airline style seating with in-built computers for passengers and 350 km/h speeds cutting the trip from Brisbane to Sydney to just three hours.

The plan seems focussed on the current metropolitan centres of the country, to the neglect of the thousands of kilometres of east coast north of Brisbane and west from Melbourne to Adelaide. It also fails to counter the claims that these metropolitan areas already have adequate highway and rail infrastructure, and that such funds could be better spent upgrading the regional highways and non-existent rail services for most of the rest of the country. 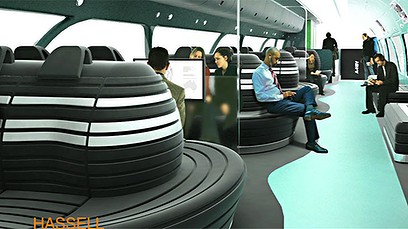