Orion gets quick rest before next date in space 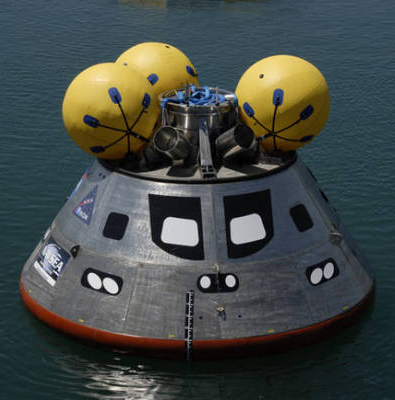 NASA’s newest space ship has made a 12,000 kilometre round trip to see if it could survive a 32,000km/h dive into the atmosphere.

The short story – yes, it can.

“There is your new spacecraft, America,” NASA commentator Rob Navias said, while live images of the Orion capsule beamed around the world.

The as-yet-unmanned Orion capsule will one day fly astronauts to Mars, and could even land someone on an asteroid.

The test last weekend went without a hitch – good news for the first people to climb onboard.

It shot to a peak altitude 5,800 kilometres above Earth - 14 times further out than the International Space Station – before plummeting back through the atmosphere at a temperature of about 2,200 degrees Celsius.

The circuit was designed to test the capsule in conditions similar to those it would face on return from another planet, such as mars.

Eleven parachutes and several tense minutes after breaking through the atmosphere, Orion has slowed to a casual 32km/h for splashdown 1,014km south-west of San Diego, California.

The module’s 1,200 sensors, heat shields, parachutes, avionics and other equipment appeared to work as designed even with no astronauts on board, but it will now undergo deep examination for even the tiniest fault.

NASA has big plans for Orion.

It is the capsule that will one day get astronauts to an asteroid, Mars and perhaps other destinations in deep space, the agency says.

With the first of those manned missions just seven years away, Orion is expected to take flight again in 2017.

The data from the weekend’s flight will help engineers tweak and refine Orion ahead of the next space test.

It is being prepared already - dubbed Exploration Mission-1 (EM-1) – and will see a different Orion capsule (currently being built by Lockheed Martin) cruise around the moon for about a week before coming back to Earth.

Another test is planned for 2018, which will see Orion's launch-abort system put through its paces. The abort is designed to get astronauts out of danger in the event of a launch emergency.

The 2017 mission will be the first to combine Orion with NASA's new Space Launch System megarocket (SLS), the most powerful booster ever built.

Following these tests in coming years, NASA says it predicts an asteroid will have been dragged into lunar orbit by a robotic probe, and it wants to visit.

The details of the "asteroid redirect mission" are still on the drawing board.

All these flights and activities are in the pursuit of a greater goal – getting humans to Mars and back.

In NASA's vision, SLS will blast a crewed Orion toward Mars in the mid-2030s.

There is plenty of engineering still to do.

NASA needs to figure out the habitat module, and design a new way to get superheavy loads down to the Red Planet's surface.

NASA officials say they remain confident that Orion and SLS will be ready when the time comes.