Nanotube mat is blacker than black 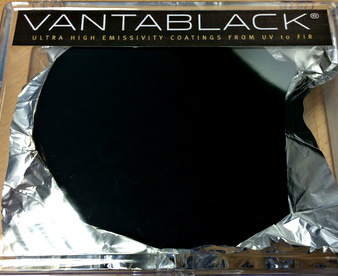 Black has become blacker, with the development of a material that reflects almost no light whatsoever.

Surrey NanoSystems in the UK have come up with an incredibly black coating, which absorbs 99.96% percent of visual light.

The material is called Vantablack and is made from tightly-woven carbon nanotubes.

Each strand is 10,000 times thinner than human hair and so intricately packed together that light has little effect.

Looking at the substance is pretty weird, according to its inventors, who say that the human eye cannot really discern its shape and dimensions.

Vantablack is grown on sheets of aluminium foil which can be manipulated to create different shapes, though everything it covers appears smooth, dark and shapeless.

“You expect to see the hills and all you can see … it's like black, like a hole, like there's nothing there. It just looks so strange,” Ben Jensen, chief technical officer at Surrey NanoSystems, told British newspaper The Independent.

If Vantablack were used to make the classic little black dress, the wearer would appear as arms and a head floating around a dress-shaped void.

There are a number of uses for a material which reflects almost no light.

“It reduces stray-light, improving the ability of sensitive telescopes to see the faintest stars, and allows the use of smaller, lighter sources in space-borne black body calibration systems. Its ultra-low reflectance improves the sensitivity of terrestrial, space and air-borne instrumentation,” Jensen said.

In technical terms, Vantablack has the highest thermal conductivity and lowest mass-volume of any material that can be used in high-emissivity applications.

It has virtually undetectable levels of outgassing and particle fallout, thus eliminating a key source of contamination in sensitive imaging systems.

“We are now scaling up production to meet the requirements of our first customers in the defence and space sectors, and have already delivered our first orders. Our strategy includes both the provision of a sub-contract coating service from our own UK facility, and the formation of technology transfer agreements with various international partners,” he said.