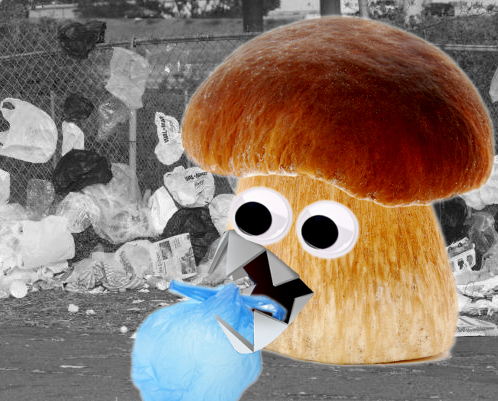 But microbiologists in the Netherlands have a plan – eat it.

Experts from across Europe have come together to design and build a device that allows them to turn plastic into an edible mushroom-like substance.

The Fungi Mutarium uses fungi to safely break down plastic, growing it into an edible food source.

First, it sterilises the plastic using UV light, which also prepares it for complete decomposition.

The UV-treated output is placed in a small agar pod (an edible, algae-based type of gelatine) and then inserted into a dome-like “growth sphere”.

In the sphere, liquefied fungi sprouts are added to the mix, and in just a few weeks fungi begins to grow out of the pods, after feeding on the plastic contents.

After a few months in the dome-shaped structure, the plastic will be completely decomposed, leaving just an agar cup filled with edible mycelium – the soft, white part of a mushroom.

The microbiologists have produced Mutarium versions of oyster mushrooms and split gill mushrooms, two of the most popular mushrooms in the world.

By their own accounts, the product is pretty tasty.

The designers say the mushrooms from the Fungi Mutarium do not appear to accumulate toxic compounds from the plastic they consume, but say it is only a test device and admit that more studies would need to be done on the safety of the fungi before the product could be commercialised.

There are also some issues of scale, with as process takes months to break down tiny bits of plastic.

The organisms in the device prefer thin plastics such as supermarket bags and other packaging.

But, as a proof of concept, the Fungi Mutarium is a truly fascinating device.

Industrial designer Katharina Unger has told reporters that there are further steps to take.

“We know that there’s potential to speed up this process simply by optimising the processes around it: temperature, humidity, the perfect microclimate for this fungi to colonise the plastic material,” she said.

“Also, though it’s more controversial, there is genetic modification. What happens if you modify the organism so that it can process the materials more quickly?”

Watch the Fungi Mutarium in action in the video below.