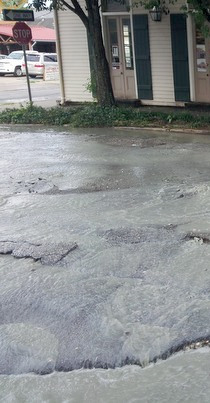 This year has seen one of Australia’s worst flood disasters on record in the eastern states, with 23 people killed, thousands left homeless, and a damage bill expected to top $1.5 billion.

Climate change aside, increasing urban development is escalating the potential flood risks and adding to the likelihood of a projected $10 billion hole in the economy by 2050 unless urgent action is taken.

Permeable pavements are used on many driveways, carparks and roads (excluding main arterial roads and motorways) and typically consist of permeable pavers laid on an upper bedding layer of between 2-6 millimetres of gravel under which lies a base course layer above natural soil.

They allow rainfall to infiltrate through their surface, storing water in the base course for later reuse, and reducing urban flooding by up to 50 per cent. However, their success is variable, depending on rainfall intensity, soil type and pavement thickness.

UniSA engineers have built an algorithm to determine the dominant soil types (clay, silt, sand or gravel) for each of 107 localities, which infiltrate water at different rates. Sand and gravel are highly permeable, for instance, whereas clay soil has a low permeability.

The design proposal is based on pavements storing 70 per cent of the water in the base course layer, with only 30 per cent released as stormwater runoff.

The found that this is possible if the base course layer in permeable pavements is suitable for local conditions, taking into account the soil type and rainfall intensity.

The pavement needs to be thicker if the rainfall intensity is higher or the soil is less permeable. For highly permeable soils, the amount of rainfall is less significant.

At least one third of Australian towns and cities fall in low to moderate rainfall areas, requiring no more than a 100mm base course layer on most of their road surfaces. However, the north-east of the country has both clayey soils and intense rainfall, requiring much thicker permeable pavements to reduce the stormwater runoff.

Many councils across Australia are already installing permeable footpaths, significantly reducing stormwater runoff to the roads, as well as storing water to support roadside watering of trees.

UniSA Professor in Geotechnical Engineering, Mizanur Rahman, says by integrating permeable surfaces on both roads and footpaths, it would markedly reduce stormwater loads and mitigate flooding.

“We are hoping to extend our design to commercial and industrial pavements, and to continue our work harvesting water using permeable pavements for watering roadside gardens,” Prof Rahman says,

“Our preliminary research shows that the carbon footprint generated in a car park could potentially be neutralised in 15 years by growing trees with harvested water. Our next step is to improve water quality using permeable pavements.”