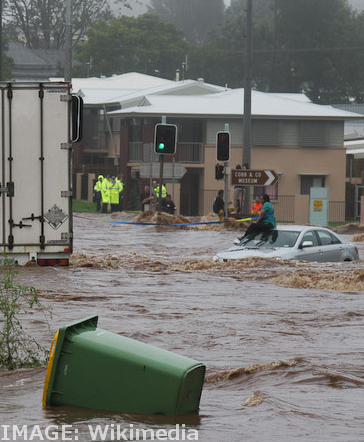 Queensland is looking at options to boost flood defences for Ipswich and Brisbane.

A plan unveiled by Water Supply Minister Mark McArdle this week raises a few suggestions, some of which have raised eyebrows already.

But authorities say something must be done to avoid a repeat of the 2011 floods, which left much of the area inundated, dozens of people dead and billions of dollars worth of damage.

There are three key ideas in the plan - a new dam at Linville (north-west of Brisbane); a new dam near Willowbank; or a project to raise the wall of Wivenhoe Dam.

Mr McArdle said if the LNP wins the 2015 state election, the government would spend 12 months on studies ahead of a decision on whether to go with any or all three of the options.

He told Fairfax Media that it was too early to talk about costs.

“There is no doubt each project could cost hundreds of millions of dollars,” Mr McArdle said.

“If they all go ahead, it will be a very large sum.”

But he said something must be done to avoid the death, damage and fallout of the January 2011 floods.

“The total estimated damage was between $3 billion and $5 billion.

“Both in Ipswich and Brisbane there were some 12,000 buildings inundated.”

The 12-month study is expected to include detailed engineering studies of plans to raise Wivenhoe Dam wall by two, four or eight metres.

The Willowbank dam could about a tenth of Wivenhoe’s size, and located on the Lower Warrill Creek to the south of the Bremer River.

Willowbank was not in the original list of eight locations announced mid-year.

But McArdle claims it is a good flood mitigation site.

“We believe that the Lower Warrill Creek site will provide protection for both Ipswich and Brisbane in a capacity that would save hundreds of homes in the event of a 2011 flood event.”

Lockyer MP Ian Rickuss said that “because the Bremer and the Lower Warrill join, it does take the pressure of the Bremer.”

He said a dam on the Lower Warrill Creek could also be used for irrigation.

“We believe we could capture a large quantity of water in Linville,” he said.

That would free up extra “flood mitigation” space in Wivenhoe Dam.

“We could store water in Linville, drop the [drinking water] capacity in Wivenhoe and let extra flood waters into Wivenhoe, therefore protecting the whole of south-east Queensland,” McArdle said.