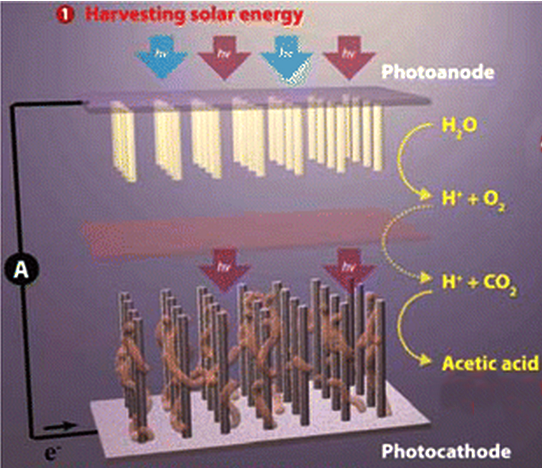 Researchers have created an exciting artificial photosynthesis system, which captures carbon dioxide and uses solar energy to convert it into plastic products and fuel.

A team at the U.S. Department of Energy (DOE)'s Berkeley Lab have created a system of semiconducting nanowires and bacteria to mimic the natural photosynthetic process, which plants use to create food.

The artificial photosynthetic system can turn a combination of carbon dioxide and water into acetate, the most common building block today for new chemicals.

“In natural photosynthesis, leaves harvest solar energy and carbon dioxide is reduced and combined with water for the synthesis of molecular products that form biomass,” says researcher Chris Chang, an expert in catalysts for carbon-neutral energy conversions.

“In our system, nanowires harvest solar energy and deliver electrons to bacteria, where carbon dioxide is reduced and combined with water for the synthesis of a variety of targeted, value-added chemical products.”

“Our system represents an emerging alliance between the fields of materials sciences and biology, where opportunities to make new functional devices can mix and match components of each discipline,” says Michelle Chang, an expert in biosynthesis.

“For example, the morphology of the nanowire array protects the bacteria like Easter eggs buried in tall grass so that these usually-oxygen sensitive organisms can survive in environmental carbon-dioxide sources such as flue gases.”

The system starts with an "artificial forest" of nanowire structures, consisting of silicon and titanium oxide nanowires.

The forest of nanowire arrays is populated with microbial populations that produce enzymes known to selectively catalyse the reduction of carbon dioxide.

For this study, the Berkeley team used an anaerobic bacterium that takes in electrons directly from the surrounding environment and uses them to reduce carbon dioxide.

The bacteria - Sporomusa ovate - make acetate, a versatile chemical that can be used to manufacture a diverse array of useful compounds for plastics, drug manufacture and biofuels.

Once the carbon dioxide has been reduced, genetically engineered E.coli are used to turn it into specific chemical products.

With this approach, the team achieved a solar energy conversion efficiency of up to 0.38 per cent for about 200 hours under simulated sunlight, which is about the same as that of a leaf.

The yields of target chemical molecules produced from the acetate were also encouraging: as high as 26 per cent for butanol, a fuel comparable to gasoline; 25 per cent for amorphadiene, a precursor to the antimaleria drug artemisinin; and 52 per cent for the renewable and biodegradable plastic PHB.

“We are currently working on our second generation system which has a solar-to-chemical conversion efficiency of 3 per cent,” said Peidong Yang, a chemist and leader of the study.

“Once we can reach a conversion efficiency of 10per cent in a cost effective manner, the technology should be commercially viable.”

A paper describing the progress so far has been published in the journal Nano Letters.