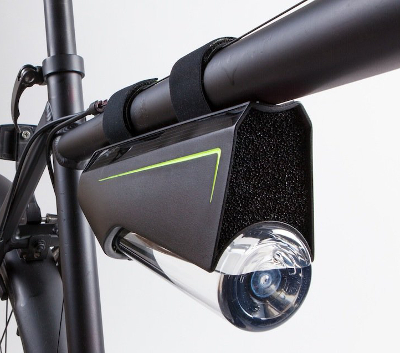 An Austrian designer has come up with a bike-mounted water bottle that fills itself with water from the air.

The device – named ‘Fontus’ - can extract humidity from the air and condense it into drinkable water. It is attached to a bike to allow cyclists to generate water during long-distance rides.

“This is simply condensation of the humidity that is contained in the air,” designer Kristof Retezár told Live Science.

“You always have a certain percentage of humidity in the air, it doesn't matter where you are — even in the desert. That means you would always potentially be able to extract that humidity from the air.”

The solar-powered device consists of a condensator connected to a series of hydrophobic surfaces that repel water. As Fontus passes through the air, it cools the condensator surfaces, causing condensation, Retezár said.

“Because they're hydrophobic, they immediately repel the condensed water that they created, so you get a drop flow [into the bottle],” he explained.

“Basically, you're taking air in a vapour state and converting it into a liquid state.”

Fontus produces 0.5 litres of water per hour in “really good” conditions – temperature from 30 to 40 degrees Celsius and between 80 per cent and 90 percent humidity.

The prototype includes a filter at the top to keep dust and bugs out.

“The water you get is clean, unless the air is really contaminated,” Retezár said.

“We're thinking about making a bottle that also has a carbon filter, and this one would be for cities or areas where you might think the air is contaminated. But originally, this water bottle was thought to be used in nature, and places where you wouldn't have contaminated air.”

The designers are also working on a version that uses a ventilator to suck air into the system, which could be installed in parts of the world where humidity is high but water is scarce.

“The idea was to solve a global problem: water issues in areas of the world where there is very little groundwater but very high humidity,” Retezár said.

“My intent was to invent a machine or device that would be able to filter the humidity in the air and turn it into drinkable water.”

The designer says he will soon launch a crowdfunding to enter mass-production of the devices for under $100.

More details are available in the video below;