Battery base could help all industries, but may be overpowered 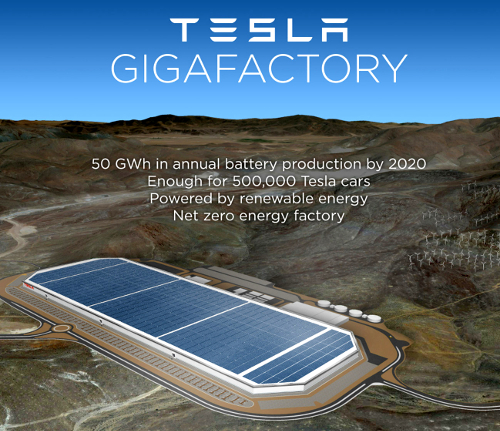 Electric car-maker Tesla has joined with electric everything-maker Panasonic to drive down the cost of batteries for anything from small devices to solar power stations.

The two companies are gambling on a $US5 billion “gigafactory” in Nevada, which they say will produce as many Li-ion batteries as the entire world used this year.

Better batteries are needed to usher-in a new age of electric transport and storage to make renewable power plants as capable around the clock as fossil-fuel burners.

Currently, Tesla’s Model S and its predecessor, the Tesla Roadster, run on around 7,000 individual Li-ion cells.

Originally, the cells were essentially the same as standard Li-ion cells found in devices such as laptop computers.

Their newest power cells have been significantly redesigned, interconnecting separate batteries and weaving liquid cooling systems around them.

Both Panasonic and Tesla hope that economies of scale will allow their “gigafactory” to produce cells for significantly less cost.

“Over the next ten years, it’s going to change to the point where we’re focused on production to meet the world’s energy-storage needs rather than waiting for a cost reduction from a radical change in battery technology,” says Tesla co-founder JB Straubel.

Not everyone is so optimistic, with a report by technology analysts Lux Research predicting that the gigafactory will provide only a modest cut in battery costs while produce about 50 per cent more batteries than industries need.

“Most other companies do not believe that battery volume will grow as fast as it’s going to,” Mr Straubel said of the report.

“They don’t understand the tight linkage between cost and volume. We’re at this crossing-point where a small reduction in cost is going to result in a ridiculously big increase in volume, because the auto industry is so big.”

“The economics in many cases have already crossed a threshold where battery packs can effectively store renewables on a very big scale,” he said.

Tesla has already produced a range of residential batteries to store rooftop solar power for times when electricity is more expensive, or to take advantage of the ability to sell power back to the grid.

But the company’s efforts so far have been plagued by interconnection problems and slow uptake by users.

Mr Straubel said he believes that favourable economic conditions will persuade utilities and home-owners of the benefits soon enough. 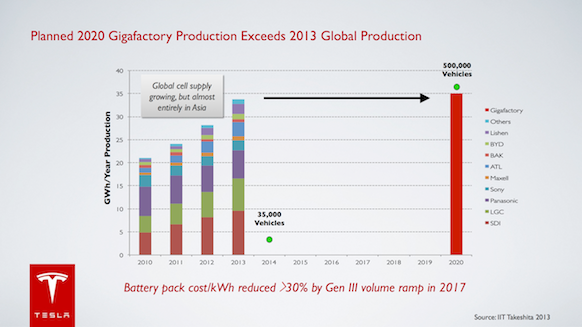