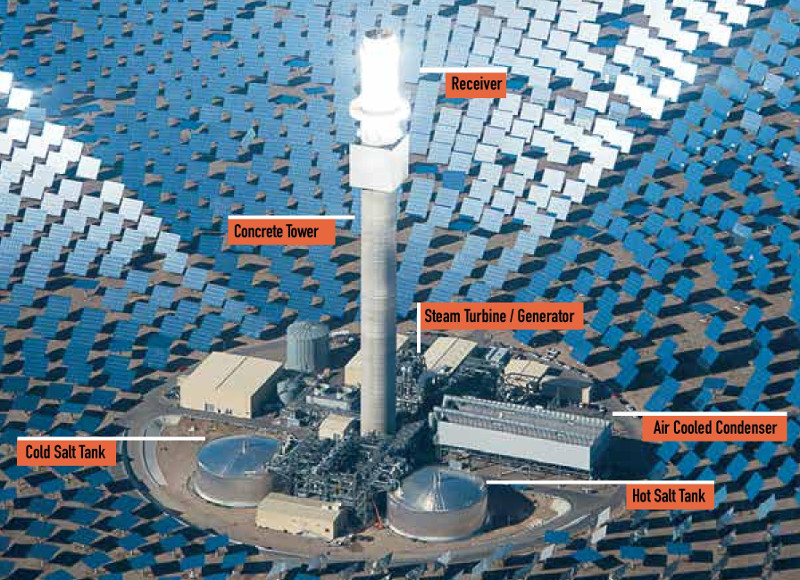 SolarReserve has secured the contract for the plant that should be operational within about three years, producing about 135MW under normal conditions, and the capability to exceed that in favourable conditions.

Construction will begin in 2018 and could be complete by 2020, with an expected 650 construction jobs and 50 ongoing positions predicted.

The project relies on a $110 million concessional equity loan from the Federal Government, secured by South Australian Senator Nick Xenophon in his negotiations on the Commonwealth’s company tax cuts legislation.

The solar thermal plant will feature about 12,000 “billboard-sized” mirrors, measuring 100sqm, arrayed in a circle of about 600ha, all focusing their light and heat at the top of a 227m tower — to be the tallest of its kind in the world.

The process heats molten salt at the top of the tower to 565 degrees Celsius, creating  a stored heat source which generates steam to drive a turbine that converts it to electricity.

Because the salt stays hot for a long time, the plant should be able to generate power at full load for up to eight hours after sunset.

Premier Jay Weatherill said the plant, dubbed the ‘Aurora’, will be the largest of its kind in the world, and supply “all of the Government’s power needs”.

Any remaining supplies will be fed into the statewide grid.

Mr Weatherill said it was part of a plan to increase competition in the open market and drive down power prices.

“The Port Augusta story is a stark example of the transition of the South Australian economy, with the closure of a dirty coal-fired power station, and now the commissioning of this world-leading renewable energy project,” Mr Weatherill said.

Energy Minister Tom Koutsantonis said the plant; “Firmly entrenches South Australia as a world leader in the storage of renewable energy (and) will help to make our energy grid more secure”.

Economist Danny Price said having a plant in the market would put “competitive pressure” on electricity prices “exactly where we want it”.

Australian Solar Council chief executive John Grimes says it could be just the first of many solar thermal plants.

"I think people will be surprised just how cheaply this can be delivered," he said.