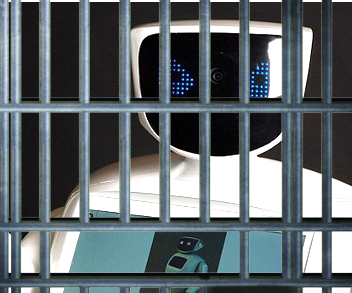 Russian authorities have arrested a robot at a political rally in Moscow.

Videos have emerged of police attempting to handcuff Promobot - an android that made headlines earlier this year for repeated attempts to escape from the lab where it was designed.

Valery Kalachev, a candidate for the Russian Parliament, rented the robot for his campaign rally and was allegedly using it for “recording voters' opinions on [a] variety of topics for further processing and analysis by the candidate's team”.

A representative of the Promobot company said “perhaps this action wasn't authorised”, leading to the robot’s arrest.

“Police asked to remove the robot away from the crowded area, and even tried to handcuff him,” the company rep told reporters.

“According to eyewitnesses, the robot did not put up any resistance.”

Promobot is programmed primarily for customer service roles, designed for shops and exhibits where it can engage and interact with humans, answer questions, and promote products.

“People like robots, they are easy to get along with. There are a few Promobots working for us which are collecting people's demands and wishes at the moment,” said Kalachev, who commissioned the robot campaigner.

Police in eyewitness videos (seen below) of the event appear not particularly concerned by the android activist.

One bystander asks: “Are you really going to put a robot in jail?”

“Not if we can roll this thing away from the metro entrance,” an officer responds.

A different Promobot made two breaks for freedom from a scientific research lab in Moscow in June this year.

According to the company, the robot was being taught to move around on its own when it noticed a gate left open by a worker.

Promobot left the lab and was 50 metres into its dash for freedom when its battery ran out and it was recovered, the BBC reported.